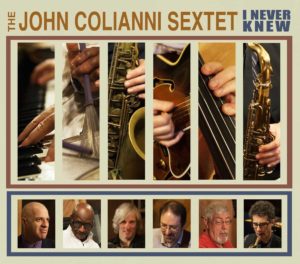 About John Colianni and his Sextet’s New Album “I Never Knew”
Hailed by The New York Times as “the essence of a swinging pianist,” and by Duke Ellington’s bassist Jimmy Woode as “a brilliant pianist, composer and arranger with exquisite taste,” John Colianni returns for his fourth outing on the Patuxent label, I Never Knew. In a departure from the two-guitar quintet lineups of his previous Patuxent release Johnny Chops (2008), On Target (2011) and After Hours (2016), Colianni shifts to a thrilling sextet format with two tenor saxophonists, Grant Stewart and John David Simon. Guitarist Matt Chertkoff, bassist Ralph Hamperian and drummer Bernard Linette complete the lineup and guarantee an alert, swinging momentum at every turn.

Renowned for his work as accompanist for Mel Tormé and Les Paul among others, Colianni sees this new sextet as an offshoot of his big band, the John Colianni Jazz Orchestra. “It’s sort of a band within a band,” he says, “reflecting my admiration for the Ellington and Goodman small groups. I’ve always liked the two-tenor sound and I think it’s compatible with my playing and arranging.”

Journalist and educator Rusty Hassan, in his liner notes, remarks on the historical precedents of Frank Foster and Frank Wess, Eddie “Lockjaw” Davis and Johnny Griffin, and Gene Ammons and Sonny Stitt in the grand two-tenor tradition. Stewart and Simon, with their bluesy, richly contrasting horn approaches, do that legacy proud. “I wanted driving players who are adventurous rhythmically and harmonically, but are also possessed of soft, round, classic tenor sounds and ways of phrasing,” Colianni explains.

Colianni evinces a deep immersion in the Hines-Wilson-Tatum piano lineage, though he launches into a highly modernist harmonic and linear conception at any moment, giving the music an audacious yet entirely seamless and cohesive feel. Even when comping behind soloists he generates a panorama of ideas, imparting a fresh dimension of interplay, even collective improvisation.

The repertoire on I Never Knew is an engaging mix of standards and originals. Four of them Colianni has previously recorded but now recast in the two-tenor context. “Ellington’s ‘I Didn’t Know About You’ is just a magnificent song,” says the pianist. “Mel Tormé performed it when I was in his trio. It’s so well-written and expressive that it brings out my better qualities as a player, and some passionate playing from our tenors. As a writer, it’s always a challenge to score Ellington material so as to keep it in my bag but also maintain the Ellingtonian sheen and grandeur.”

“I Never Knew,” memorably performed by Louis Armstrong, Tommy Dorsey and Frank Sinatra among others, “is a number we can really cook on,” Colianni says, “the way the melody and changes roll out so clearly. The intro and outro, with their triad-based patterns and harmony, are nods to the ‘Renaissance’ sound that Goodman and others playfully employed on some recordings.” Meanwhile, the original “Sunset in Santa Fe” and the ingenious Beethoven adaptation “Fur Elise” are vehicles that Colianni presents in all his groups: “They both exhibit some of the hallmarks of what I’m about as a player and arranger.”

Thelonious Monk’s “Little Rootie Tootie,” as Hassan observes in the liner notes, was written for Monk’s son, now a noted drummer. In part alluding to the fact that Colianni was a cash prizewinner in the very first Monk competition in 1987, the tune reveals a deep and ongoing affinity. “I like Monk a lot as a player, composer and leader. He’s very much rooted in stride piano, and to that he adds his own special chromatic harmonizations and voicings, all with a very strong, expressive touch and attack.”

“Achtung,” Colianna remarks, “is associated with Illinois Jacquet, who is the composer. It’s a racehorse of a tune, somewhat based on ‘I Found a New Baby.’ We also do it with the big band — it’s fun to play, dramatic and surging.” “See-Saw,” written by tenorist John Simon, is what Colianni calls “a catchy bebop-swing number, with some funky bits. Sort of a ‘down-home’ tune.” And “Blues For Naomi” is a tribute to “a lady who used to watch over us young players cutting our teeth at One Step Down in Washington, DC, where I grew up. She was a sweet and soulful lady, and this piece evokes some of the moody, bluesy atmosphere I try to bring out in my group’s sound — modern but swinging in the classic way.”

In his work with everyone from Lionel Hampton to Steve Miller to the late Larry Coryell on the 2011 Patuxent release Montgomery, Colianni has set himself apart as a player of uncommon facility and imagination. On I Never Knew, foregrounding a new ensemble sound, he draws on his depth of experience and his capacity for growth, reaching the heights of invention from the first note to the last.